Starting Lineup (SLU) figures stood about 4 inches tall and included a collectible card with each figure. They were first procued in 1988 by Kenner and later by Hasbro. Pat McInally, a former NFL player for the Bengals, came up with the idea for creating the figures. Figures of almost all professional sports were made - including Baseball, Football, Hockey and Basketball and to a lesser extent, Boxing, Racing and Olympic figures among others. Leagues include NFL, MLB, NBA, NHL, & more. 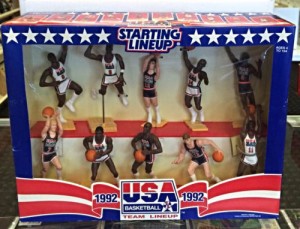 SLU figures were extremely popular with sports collectors in the 1990's. Many Starting Lineup action figures are still valuable to this day, especially the figures from the late 1980's, with the extremely rare pieces fetching a few thousand dollars. The last Starting Lineup release was the 2001 baseball series.

Collectors can find player figurines on this website, on ebay, and other specialty websites. Here, we've made it easy to find thousands of figures where you can find them by sport, league, year, series, and player.

$199.99 (  Bids)
Time Remaining: 7d 13h 4m
Buy It Now for only: $199.99
Buy It Now | Bid now | Add to watch list
The items listed above are items from 3rd party sellers on ebay. StartingLineupFigures.com is for informational purposes only.