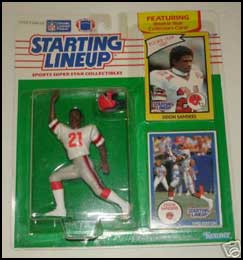 What began way back in 1988 with Starting Lineup football figures was the beginning of an entire new market of sports collectibles. The popularity of sports and the advancement of toy production, allowed for sports action figures to made with incredible detail for the first time.

NFL Starting Lineup figures were produced from 1988-2000 they are also referred to as SLU football figures for short. The most popular series these days are the earlier series, with the 1988 and 1989 nfl starting lineup figures being the most popular.

1999 Heroes of the Gridiron